All photos provided by Tracy and Jeremy

With the COVID-19 pandemic, more and more families are struggling to stay afloat, let alone get ahead. Families like Tracy and Jeremy, their two-year-old daughter, Bernadette, and their baby on the way.

Even before the pandemic, the couple’s income was just enough to scrape by in NE Portland. Jeremy works as a driver for UPS where he’s been for 14 years and makes a good income. At Tracy’s retail job she made $15 an hour. But with the rising cost of living, especially as the couple looked into enrolling Bernadette into preschool, it wasn’t enough. One unexpected bill – a trip to urgent care or their car breaking down – and they would be in the hole.

With little upward mobility available in her current job, Tracy and Jeremy couldn’t see a way to get ahead or build a better future. Then came an opportunity that offered hope. Tracy applied for an eight-week Trades and Apprenticeship Career Class with Oregon Tradeswomen Inc, a local nonprofit that supports women in the trades through education, leadership and mentorship. She enjoyed working with her hands and knew the trades continued to offer workers a living wage and good benefits.

The eight-week class would be all day long, Monday through Friday, and require Tracy to quit her retail job. But if she could complete the career class, then Tracy would almost be guaranteed automatic entry into a pre-apprenticeship program where she could work on becoming an apprentice. As a first-term apprentice with the carpenters union, she could make as much as $25 an hour, a $10 jump in her hourly pay.

Due to their combined household income, Tracy and Jeremy existed in that gray area that so many families across our region find themselves in – they made just enough to be disqualified from many safety net programs, but not enough to be able to pay for all their basic needs like rent, healthcare and especially childcare.

“Childcare in Portland is one of the main barriers, I think, for a lot of women going into work, whether it be a trade or not,” says Tracy. “I happen to live in a part of Portland that is really slim pickings on childcare. There's just not a lot. For a lot of families, men and women, it's like you can either work or you can pay for childcare. You can't do both.”

Oregon has the fourth most expensive childcare in the country and, prior to the pandemic, there was already a shortage of preschool openings across the state. COVID-19 has only magnified many of the cracks in our childcare system. Findings from a national survey of childcare providers back in March 2020 show that nearly 50% of providers said the loss of two weeks or less of tuition would cause them to close their doors permanently. The economic impact of the pandemic is disproportionately affecting Black, Indigenous, People or Color (BIPOC) women who more commonly work as child care providers and who are already most economically vulnerable.

Oregon has the fourth most expensive childcare in the country

Luckily, Tracy was able to connect with Labor's Community Service Agency  (LCSA), a United Way of the Columbia-Willamette nonprofit partner. For over 45 years, LCSA and United Way have been working together to make our region a better place for kids and families. Throughout the last four decades, United Way has stood beside Labor and helped over 15,000 union families with rent, utilities and food assistance.

Thanks to funding from United Way, LCSA was able to help Tracy and Jeremy find a high-quality preschool for Bernadette and pay for tuition while Tracy completed her class. With childcare costs covered, Jeremy was able to work overtime to make ends meet. He also continued to give back to his community. In the 14 years Jeremy has worked for UPS, he's also given to United Way each year, helping to make our region a better place through payroll deduction.

“It really is a stress reliever, a huge stress reliever,” says Jeremy. “I can just work and know that my child is in really good hands. It's a great relief and she's getting a well-rounded early education.”

At United Way we see high-quality, tuition-free childcare as a critical tool to addressing poverty and economic disparities in our region. It’s not enough to help one family at a time, what we need is to change the system. That’s why United Way of the Columbia-Willamette’s Early Learning Multnomah County Hub (ELM) helped to develop and implement Preschool for All. The initiative aims to provide tuition-free preschool to all 3- and 4- year olds in Multnomah County, ensuring children have opportunities they need to learn, grow and be successful, and ensuring families have the support they need to earn a living.

Thanks to ELM’s Parent Accountability Council (PAC), parent voice was at the center of the Preschool for All Task Force, led by Multnomah County Commissioner Jessica Vega Pederson. Through PAC, parents from African American, African immigrant, Asian, Latino, Native American and Slavic communities helped shape recommendations for expanding access to preschool across the county, especially for children in communities who are not currently being served.

In November 2020, Multnomah County voters overwhelmingly passed the Preschool for All ballot measure (26-214), recognizing the importance of investing in child care and early learning programs. Research estimates there is a $7-16 return to the community for every $1 spent on preschool. The return on investment comes in the form of children better prepared for school, and students achieving higher lifetime earnings and better health outcomes. 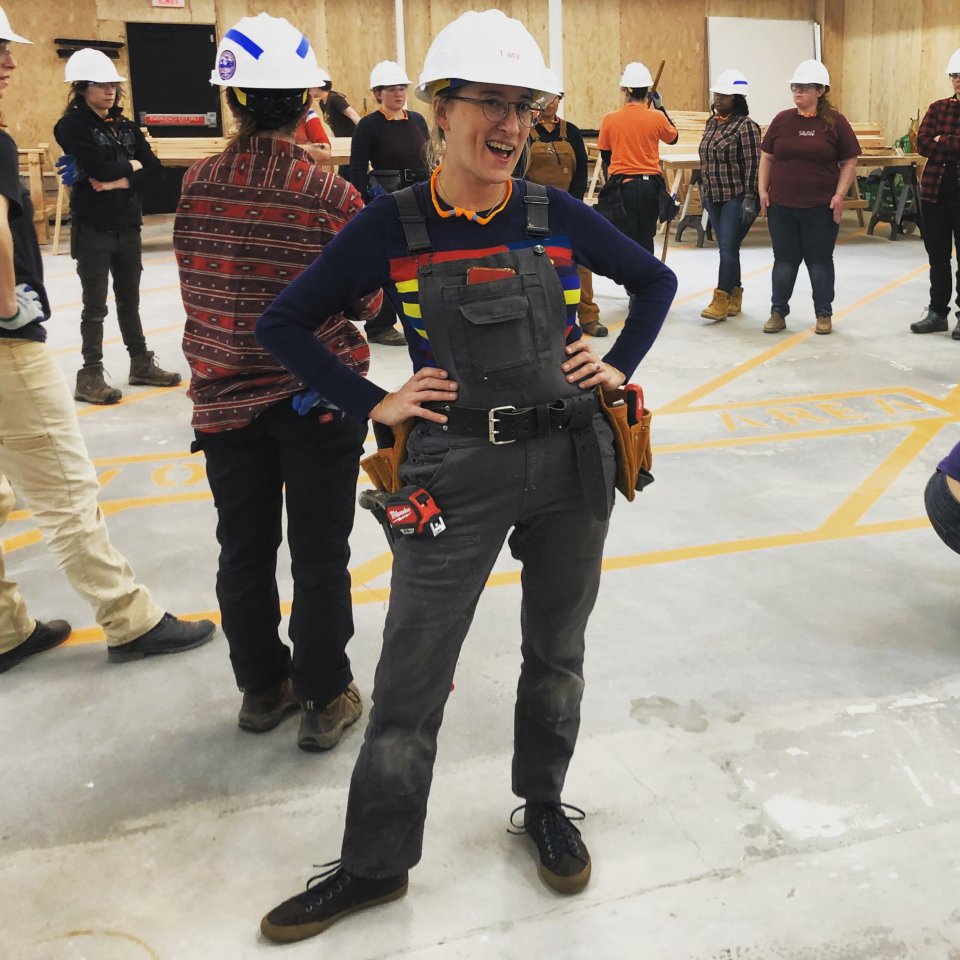 Tracy and Jeremy are banking on their own return on investment in Tracy’s career. With LCSA assisting with childcare costs, Tracy graduated from the Oregon Tradeswomen class and was accepted into the Carpenters Trade Pre-Apprenticeship program. She’s now one step closer to becoming a first-term apprentice and earning a higher wage.

“There's a light at the end of the tunnel,” says Jeremy. Down the road, the couple hopes to be able to purchase a more reliable car and perhaps rent a bigger apartment. They’re also excited to save to buy a house one day.

More than a reliable car or additional living space, Tracy and Jeremy now see a path to building brighter futures for Bernadette and her sibling on the way. “Bernadette is super smart. I want her to be able to really flourish, and learn, and grow…to be able to do the things that maybe Jeremy and I weren't able to do,” says Tracy. “I think that's the goal of any parents, is to just do a better job.”

“Bernadette is super smart. I want her to be able to really flourish, and learn, and grow."

Learn more about the incredible work of Labor’s Community Service Agency and Preschool for All.