Fostering student success in and outside of school

“Nasteho connects really well with the kids, she knows the struggles of being in American schools, can put herself in their shoes and is super empathetic,” says Muna Abu, a youth programs coordinator at Immigrant and Refugee Community Organization (IRCO). IRCO is one of five community based providers part of Successful Families 2020 – a collaborative established by United Way, with the goal of ensuring successful outcomes for kids of color and their families in Multnomah county.

Muna has been working in the SF2020 program since 2016, as a youth and family advocate for David Douglas School District. Her voice swells with pride as she talks about Nasteho, a beneficiary of SF2020, a current sophomore in college, having graduated from high school in 2018, and now interning at IRCO during the summer.

Nasteho, a Somali who moved to Portland at the age of seven with her parents, two brothers and three sisters, says the program created a sense of belonging. Before SF2020, she wasn’t as involved in school, but since being part of the program, Nasteho felt she found a safe haven for kids like her, for whom English isn’t their first language, to come together, socialize and also get the academic support they need to succeed.

“It was nice to have somebody to go to, who spoke my language and knew what I was going through at school. The advocates really motivated me to get better grades and helped me succeed."

Within the SF2020 program, the partners are committed to aligning their work around a common, tested framework. By strengthening collaboration and developing efficient partnerships with school leaders and other key stakeholders, they're ensuring better outcomes for students in communities deeply impacted by gentrification. The program operates in David Douglas and Reynolds School Districts which house the two largest high schools in the state and have high levels of racial and cultural diversity. Through the collaborative and the direct service expertise of the partners, SF2020 is demonstrating that culturally responsive and culturally specific partnerships can drive measurable change in student, school and family outcomes.

SF2020 goes beyond just providing academic support to kids of color. Through the collaborative, the program also provides wraparound services to their families like rent and utilities assistance, language services, parent engagement. The program additionally connects families to other resources they may not have access to, such as job placement, healthcare services or finding means of transportation. With SF2020 staff located in the school, parents who come in throughout the day are connected to all the services right there so they don’t have to go seek outside spaces or resources to look for support. “If we don’t connect with the parents, don’t help them, then there’s no way we could get to the kids. Relationship building is everything,” says Muna.

“The biggest benefit [of the collaborative] is that if you need a resource you know whom to go to. It’s very accessible” says Muna.

Even after Nasteho’s graduation, Muna still maintains a strong connection not only with her but with the rest of Nasteho’s family. Nasteho's two younger sisters are now part of SF2020 and are getting the support they need to stay in school, improve their grades and graduate.

Long after students graduate and leave the program and the school district, most of them stay in touch with the SF2020 staff because they’ve become part of their community. They feel they’re part of their family through the relationships built in the program.

Speaking about the program’s evolution and United Way’s role, Muna says, “Having someone from United Way there all the time helped streamline the program and clarify any miscommunication between our jobs and the school’s priorities so that we are being effective in our work.” Leveraging data to better understand the experiences of students of color, the United Way team associated with SF2020 also works collaboratively with the teachers and administrators to deepen their ability to better serve the needs of the students and their families. 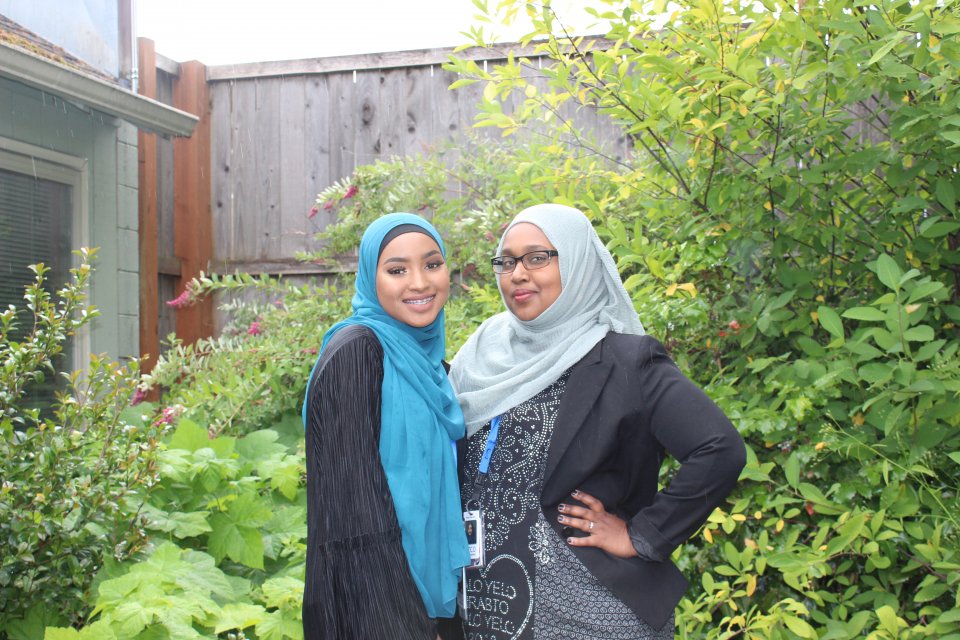 "Our students that we work with right now are who we really want in the future to come back and work with future kids because they have been through the experience and the system." 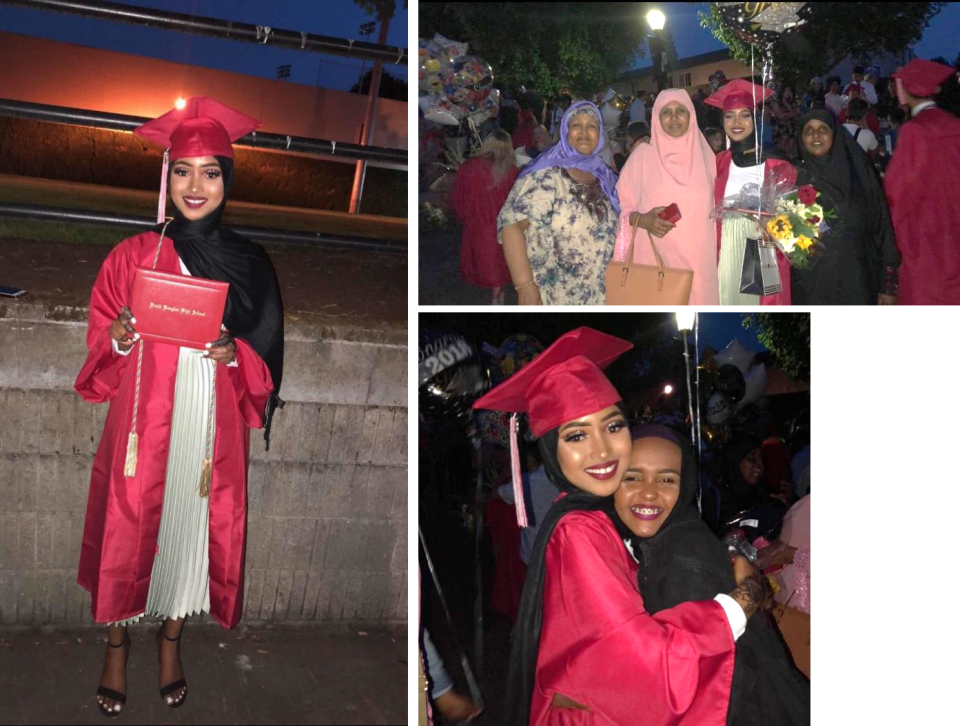 Nasteho at her graduation with her friends and family 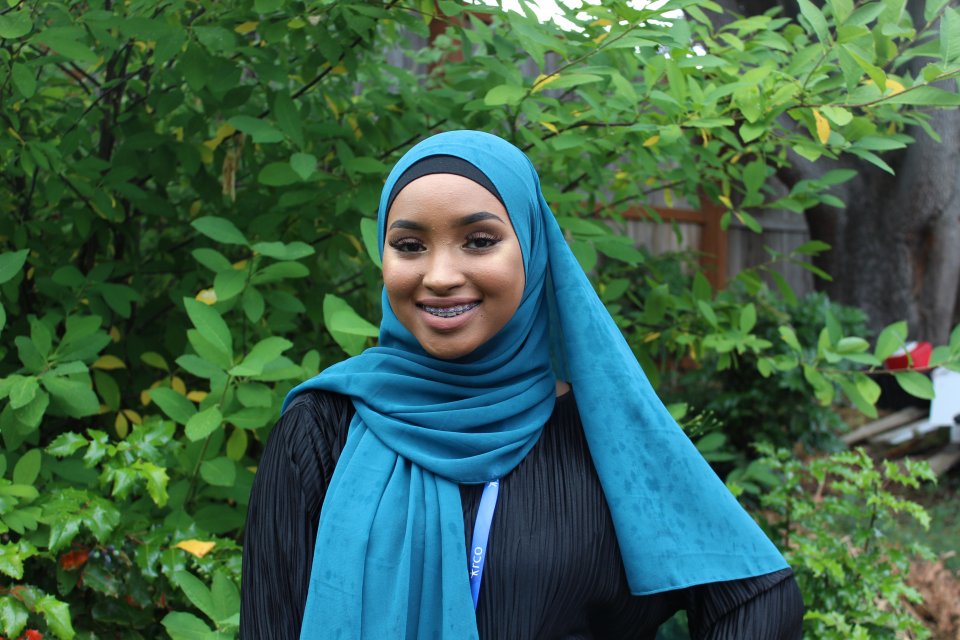 Nasteho, outside IRCO where she is interning for the summer

As for Nasteho, she wants to get a Master’s degree in social work. In addition to interning at IRCO, where she works with kids from first to fifth grade at Mill Park, Nasteho also works as a caregiver at a senior home. With two jobs, she has a full load in the summer working seven days a week. Lightheartedly Muna jokes, “Nasteho wants braces and her mom has said she has to pay to get them so that’s why Nasteho is working two jobs. She cannot be without a job until she pays for them!”

When asked about her dreams for the future, Nasteho says, “I want to give back the support that I had when I was going to high school, and I know that there are a lot of kids who don't speak English or who need help and I want to be able to help them succeed.”

Powerful words from someone who initially wasn’t interested in school, and is now eager to pursue a Master’s degree. This transformation alone speaks volumes about the impact SF2020 is having on kids and families of color in our region.

“I want to give back the support that I had when I was going to high school, and I know that there are a lot of kids who don't speak English or who need help and I want to be able to help them succeed."

Set up as a five year program which was originally slated to end in July 2019, United Way was recently awarded a $2M grant by Multnomah County to continue to serve as the backbone agency for SF2020 for the next year.