Reducing Racism in Our Communities: A Q&A With Civil Rights Leader Karen Narasaki

As a civil rights activist with a powerful voice in the census, Karen Narasaki, Commissioner of the U.S. Commission of Civil Rights appointed during the Obama administration, is an advocate for immigrant rights and race relations. With International Day for the Elimination of Racial Discrimination fast approaching on March 21, we asked Karen Narasaki about her advocacy work, the inspiration behind her role in civil rights activism and her take on reducing racism in our communities.

The following responses were provided by Karen Narasaki in her individual capacity and do not reflect the views of the civil rights commission.

What inspired you to become a civil rights activist?

My parents were imprisoned in internment camps during WWII with their families as teenagers. Both were born in the US, but my father said it was because there were not enough Americans willing to speak out against this clear violation of our Constitution and their human rights. After they were married, they faced housing discrimination as people of color were not allowed to buy homes in many neighborhoods. Additionally, my mom and other college educated Japanese American women were denied promotions at the local utility company where they worked – they were passed over for white men who had only high school diplomas. And during law school, there was a rise in hate crimes against Asian Americans when the Japanese auto companies were outcompeting American car makers.

What is your earliest memory of experiencing/witnessing discrimination? How did that shape your movement toward political activism and advocacy for civil rights?

I grew up in a primarily white town in a neighborhood with blue collar workers. From time to time I heard the words Jap and Chink. When I was in junior high school we learned about the WWII Internment of Japanese Americans. My parents had never spoken of it to us. They were active with the Nisei Vets group and my older sister was active in the push for the Equal Rights Amendment. So, I grew up with examples of activism. My father told me that in a democracy, you get the government you deserve. If you don’t participate, you don’t have the right to complain about the outcomes.

"My father told me that in a democracy, you get the government you deserve. If you don’t participate, you don’t have the right to complain about the outcomes." 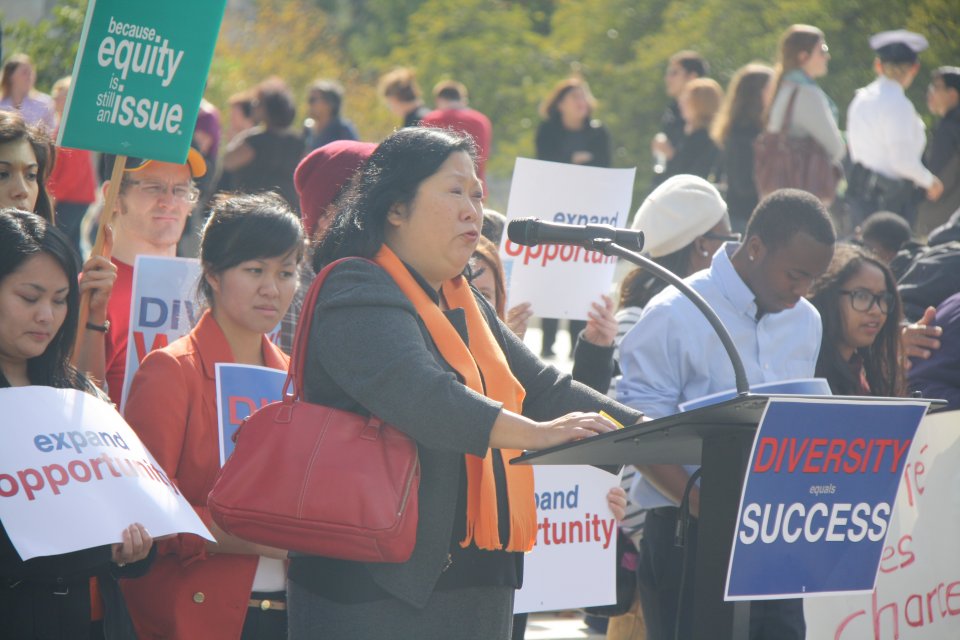 How do you feel you were able to use your political role serving as Commissioner on the United States Commission on Civil Rights as a platform to speak against racism in society?

As an independent agency, the Civil Rights Commission is considered the nation’s watch dog on civil rights. Every major piece of legislation since the Civil Rights Act of 1964 has its roots in hearings and recommendations made by the Commission. I have worked to make sure that issues facing people with disabilities, indigenous peoples and the LGBTQ community are being raised even though there is currently no one from these communities on the Commission.

We’ve held hearings on a number of issues including hate crimes, inequitable public school funding, environmental racism, the failure to meet treaty obligations to Native Americans, the widespread violation of voting rights, inappropriate use of force by law enforcement, deplorable detention of immigrant women and children.

Asian Americans have largely been invisible in media until fairly recently and in corporate initiatives meant to provide equal opportunity in the work place for women and people of color. I believe that popular media has a powerful role to play in either reinforcing or dispelling stereotypes – it is an industry with good jobs that were largely not accessible to people of color. It is an industry that doesn’t lend itself to employment discrimination litigation because those who sue then get blackballed from the industry. As I explored this issue, I learned how advertising dollars drive the kinds of television shows that get made and how Nielsen ratings also impact decisions by networks. When I was the President of Asian Americans Advancing Justice/AAJC I jumped on opportunities to push companies to invest in diversity and inclusion and saw that with strategic persistence over a decade, moving on many fronts, we were able to make a difference.

"I have worked to make sure that issues facing people with disabilities, indigenous peoples and the LGBTQ community are being raised." 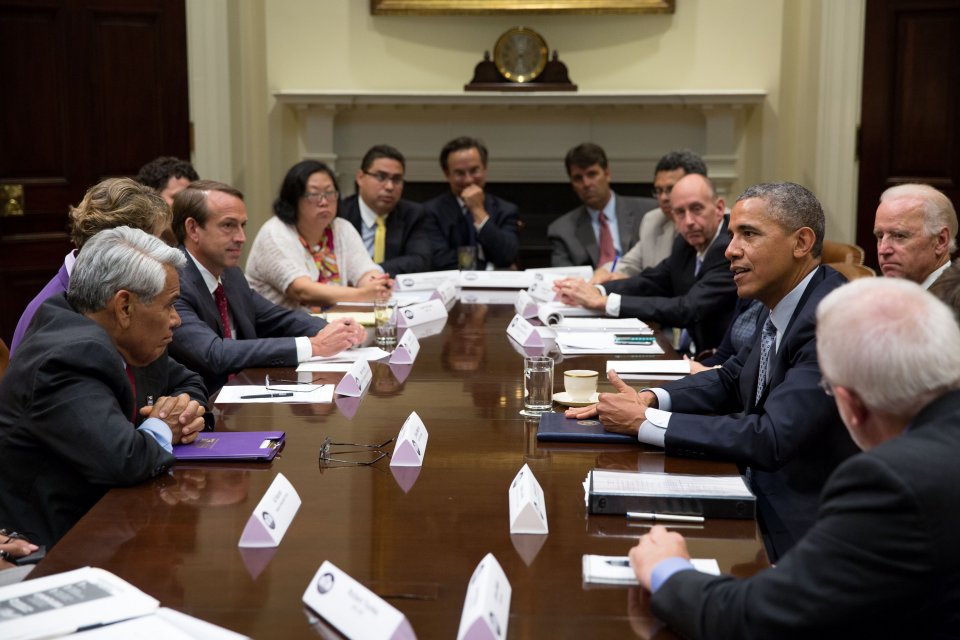 Karen participating in a meeting on immigration during the Obama administration

Why, according to you, is racial equity important in philanthropy?

Like many networks, philanthropy operates somewhat on who you know. In order to get funding, you need to get access to foundations and donors. They need to be aware of the issues you work on and understand the communities with whom you work to be willing to take the time to meet with you. If people making the funding decisions do not come from minority communities, they are less likely to have personal knowledge of the issues, opportunities and challenges in those communities.  There are systems at work as there are at almost every American institution that historically tended to exclude people of color. When I began working in civil rights, Asian Americans and other people of color were largely not on staff, not in senior level positions or board members at foundations. Many immigrants come from countries that do not have the kind of philanthropic and nonprofit systems that exists in the United States and are not aware of the sector.

When I began this work 25 years ago, much of the national funding came from the northeast where Asian Americans were less prevalent and the stereotypes of the model minority were strongly held. It took an African American law professor from California who was on a fellowship at a major foundation to start asking why foundations were not investing in the Asian American civil rights movement. Asian American organizations had long existed, but they weren’t getting in the door. Given the changing demographics in the U.S., there are not many places where a foundation can help address problems or develop successful strategies that does not take race into account and that does not seek to fully understand and empower these communities.

Why is it important to ensure we count the unreachable in Census 2020? What are some of the current challenges in doing so?

Almost $900 billion dollars of federal funding are shaped by the census count directly or indirectly. And as the only actual count, almost every federal and many private data surveys and statistics are developed based on the census. Because it happens only once a decade, a significant error lasts for 10 years. Foundations and their grantees use census shaped data to identify issues, shape strategies and measure progress. The count is required by the Constitution because it is used to allocate the number of seats each state gets in the House of Representatives. The data is also fundamental to the enforcement of civil rights and decisions about where to build schools, parks, senior centers, hospitals and businesses.

Immigrants come from countries that may not have a census or have left because of oppressive governments and under this Administration have a deep fear given the anti-immigrant rhetoric and harsh immigration enforcement tactics that are being employed. People are undercounted because they don’t know what the census is, how it affects how federal and other services, programs and funding is directed, and how it impacts their ability to have an effective voice in government. They are not aware of the strong confidentiality protections or do not trust this Administration to follow the law. While it is Congress’s duty to get an accurate count, it can’t happen because of the distrust of government without the engagement of local leaders and trusted voices.

"People are undercounted because they don’t know what the census is, how it affects how federal and other services, programs and funding is directed, and how it impacts their ability to have an effective voice in government." 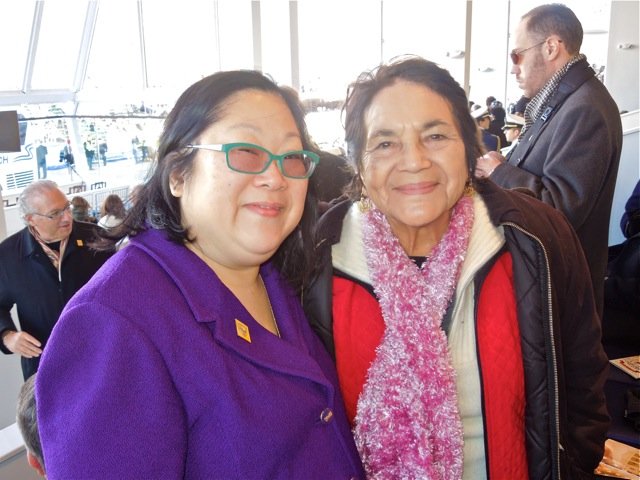 Karen with Dolores Huerta, co-founder of the United Farmworkers

What can individuals do to become advocates for both civil rights and ending racism, both within their personal circles and within society?

"Be an ally. In this environment, silence is complicity." 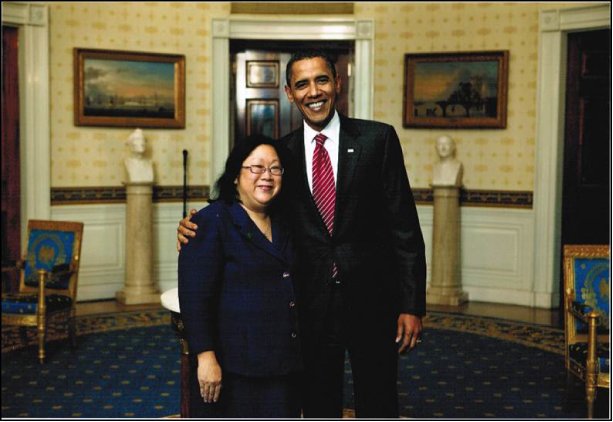 For more information on the upcoming census visit: Funding an Equitable 2020 Census Count.